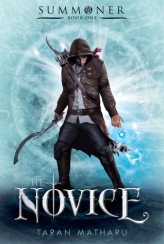 The Novice by Taran Matharu

Fletcher has no idea how he ended up in Pelt working as a blacksmith’s apprentice but he loves his adoptive father and life is pretty good despite the war going on around them.  A chance meeting leads to the discovery that he has the rare ability to summon demons.  Forced to flee the village for a crime he didn’t commit, he travels with his demon, Ignatius to the academy for Summoners where he is taught the ancient art.

Classes are gruelling and the divide between nobles and commoners is trying but Fletcher finds he is unusually gifted and prepares to serve as a Battlemage in the war against the Orcs.  Rivalries grow and betrayal is rampant as Fletcher must decide who to trust.

I’ve always enjoyed books with a male lead and Fletcher doesn’t let me down.  He’s a well-developed character, heroic yet flawed and I really enjoyed the relationship between him and his demon, Ignatius.  Even all the minor characters came from well thought out backgrounds.  The plot is nothing new (Hero’s Journey and all that) but for some reason, I didn’t mind.  Fletcher was believable and the relationships he formed worked for me.

I have just started the third book in the series and am still enthralled with the world that Matharu has created.